The lack of a standard on what colors to use on HMI screens is a serious problem, because the most of HMI graphic pages depended on the personal taste of the engineer that realized it.
It’s not the first time that i see purple buttons, blue leds and green backgrounds.

Even if there isn’t a written standard on what colors you should choose, there are some “best ways” to design graphic page and make HMIs as helpful as possible.

Some colors that you should consider to use

This is the standard that i use as much as i can:

Exmaple of some bad screens

I took some samples of what i think are bad screens: 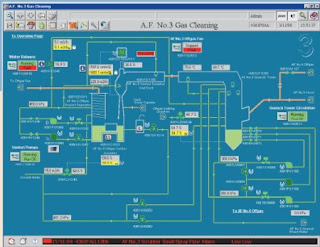 Blue background with light green pipes, green and gray tanks and green valves and pumps. Definetly not a good contrast and not good pictures too. 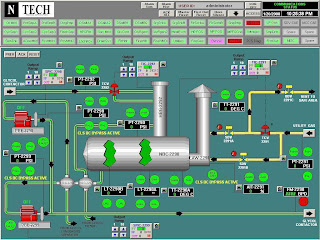 Here pictures are better, but the contrast green on green is still bad. And on top there buttons or tag without a graphic modeling, so i can’t imagine how they can help an operator.

This is what i call a useful screen. 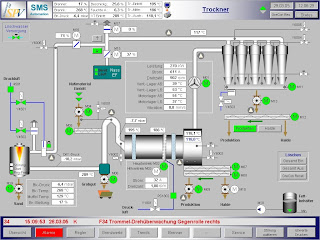 with good contrast, not much led and the active ones in green (as you can see you notice them instantly on gray) and alarms in red.

This can be useful too, even if more complex: 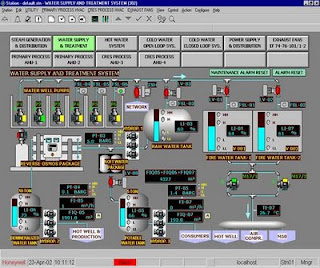 Notice the good contrast for liquid levels on tank. I don’t know if components are red because they are not active or in alarms (as i hope), but it’s definetly a good representation.

There is a very good article about choosing colors, animations and setting up a Graphical User Interface; you can read it on rollthunder.com – WpfForGoodAndNotEvil.htm

Even if it’s really long, i try to write his points in short:

The point that i liked the most is this one: Motion attracts a user’s attention. Natural selection brutally pounded that design pattern into the human brain and visual system. Our savannah-based ancestors that noticed the twitch of the saber-tooth tiger behind the tall grass avoided being eaten and passed their attentive genes on to their descendants. The ones who didn’t notice the motion got eaten, and didn’t.  Every single user is the inheritor of roughly 13,000 generations of homo sapiens who noticed motion better than the ones who didn’t make it.

As user interface expert Jared Spool wrote of his test of a Disney web page containing an animated logo, that corporate branding icon so beloved of marketeers everywhere: “Users first tried to scroll the animation off the page, and when they couldn’t, actually covered it up with their hands so they could read the rest of the text.”

I really reccomend to check this article, is well written and with tons of examples.

Book a 1on1 session

Mesta Automation is a mentor on CodeMentor.io. On CodeMentor, you can book a 1on1 session, usually call + screen sharing, with your favorite mentor.